NarrowBand IoT (NB-IoT) is a low-bandwidth, energy and cost saving mobile radio technology. Deutsche Telekom’s currently used protocol to connect devices to Cloud of Things via NB-IoT is MQTT-SN. MQTT-SN is derived from the widely used protocol MQTT and fits perfectly to the specifications of NB-IoT.

In this How-To we show you a simple process of sending measurement values to Cloud of Things.

Prerequisites
Before using it, esnure that you meet the following requirements:

The instructions here show real examples of AT-commands, which are modem specific and will only work for u-blox SARA-N211 modem with firmware version 6.57. Nevertheless, the shown MQTT-SN messages are generally valid.

When using another modem please refer to the corresponding AT-commands manual.

Before opening a socket, ensure that your modem is attached to the network.

Now messages can be sent and received.

To send a message use this command and note the response.

When the modem receives an incoming message, it notifies the user with an indication (+NSONMI) also called an Unsolicited Result Code (URC). The URC specifies the socket on which the message was received and the number of available bytes, which can then be read as follows:

The following figure shows the basic message flow between the modem and the MQTT-SN Gateway when sending a measurement value to Cloud of Things. 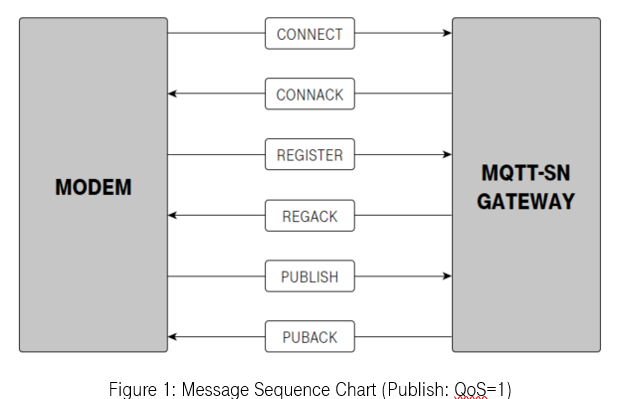 The first message is CONNECT and is sent to setup an active connection.

The general syntax of a CONNECT message is given as follows:

Note: The MQTT-SN messages are built up syntactically. The connect message in this example starts with "1D0428011388<IMSIPassword_hex>". Everything in the string prior to that point is derived from the Send message syntax, which was described earlier in this article.

The returned message “030500” is a CONNACK and shows the successful setup of the connection.

MQTT-SN is designed for low-bandwidth networks and therefore uses TopicIDs instead of Topicnames as in MQTT. Therefore, a TopicID has to be registered before messages can be published. The specific Topicnames for Cloud of Things are defined in [Developer Guide]. The Topicname for e.g. humidity is NBIoT/>IMSI>/MES/5 and will be used as an example in the following.

The general structure of a REGISTER message is given as follows:

The response to a REGISTER message is a REGACK message which contains the TopicID (red).

The third message is a PUBLISH. It is used to publish data to the registered topic.

The general structure for a PUBLISH message is given as follows:

Updated about 3 years ago