You may also visit our IoT Creators Support Forum to get access to further extensive support material, FAQ’s, and network coverage information. You may also ask individual questions that will be answered by our Telekom experts.

LTE-M like other 3GPP™ access technologies is deployed in licensed spectrum and can be accessed using LTE-M compliant chipsets and modules.
On our Roaming page you can see details about PLMN-IDs and bands for different countries where you can connect our SIM to LTE-M networks.

The latest information on the certified chipsets and modules can be retrieved from here or drop a question in our forum.

Customers can access and use all LTE-M features and capabilities over Telekom’s standard public APN’s using Telekom’s Global SIM.

Customers with private APNs for Classic M2M connectivity may also access LTE-M over these private APNs.

The 3GPP™ feature Long-Periodic TAU, as defined in TS24.301, is used to periodically notify the availability of the IoT device to the network. The procedure is controlled in the device’s chipset via a periodic tracking area update timer (T3412), which has an extended version (IE) for LTE-M.
The benefit of the Long-Periodic TAU is that the chipset protocol stack can remain longer in deep sleep mode before it must wake up to send a TAU message.

In Telekom’s LTE-M network, customers can specify the T3412 value to be applied in the network, this value must be set between 1 hour and 310 hours.

The 3GPP™ feature Power-Saving Mode (PSM) helps LTE devices conserve battery power and potentially achieve longer battery lives. Although it is possible for a device’s application to shut down its radio module or chipset to conserve battery power, the device would subsequently need to reattach to the network when the radio is turned on. This reattach procedure consumes energy that can become significant over time and generates unnecessary signaling. The alternative is to use PSM to disable parts of the chipset protocol stack and drop power consumption into the micro-Ampere range while remaining attached to the network.
When a device initiates PSM with the network, it provides two preferred timers:
• PSM Activity Timer (T3324): Time during which the device remains in idle Mode, listening to paging messages.
• Long-Periodic TAU Timer (Extended T3412, see paragraph above): Time between two Tracking Area Updates.
The time during which the IoT device module or chipset is in so-called “Deep Sleep Mode” is the difference between these two timers.
For the duration of this deep-sleep mode, the network retains the state information and the IoT device remains registered with the network. If a device awakes before the expiration of the time interval to send data, a reattach procedure is not required, and energy is saved. 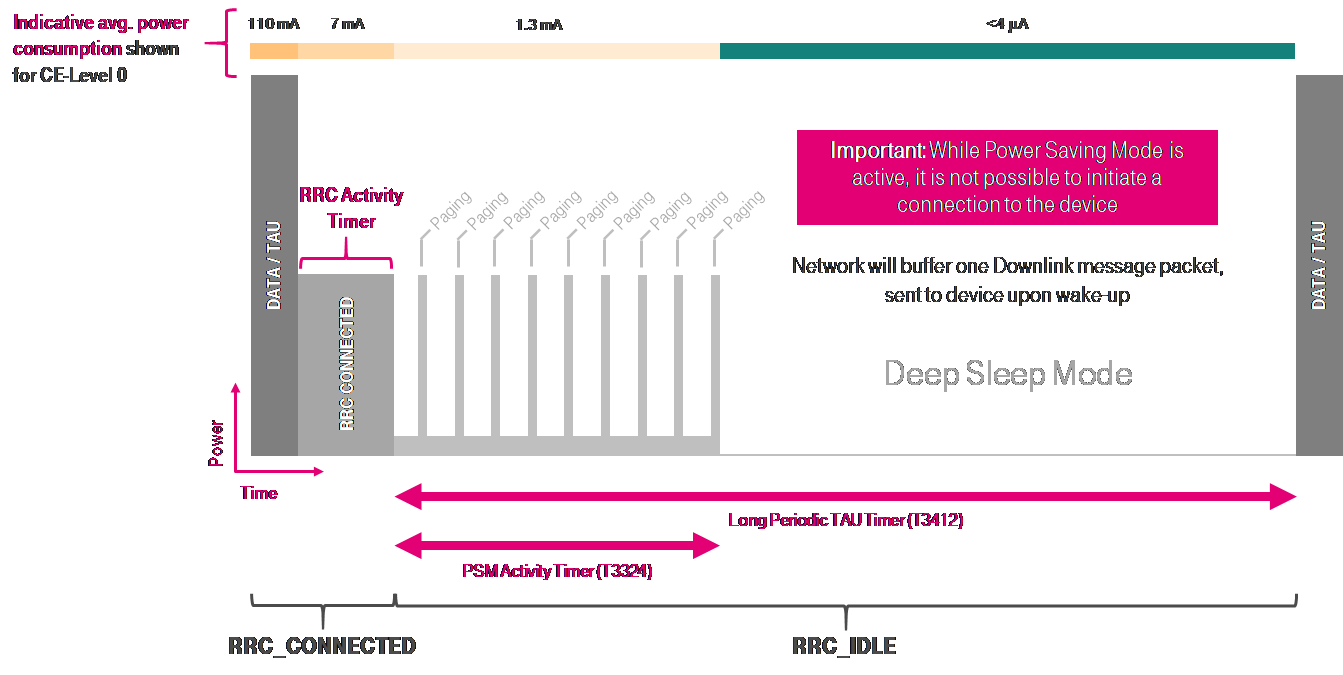 In Telekom's LTE-M network, customers can specify the T3324 value to be applied in the network, this value must be set between 0 second and 11.160 seconds (186 min).

The 3GPP™ feature Extended Discontinuous Reception (eDRX) is an extension of an existing LTE feature which has been introduced to enable IoT devices to further reduce their power consumption.

This feature has been designed for downlink-centric applications (e.g. actuators) that usually receive rather than send data and is found especially useful when it is uncritical for the device to be unreachable from several seconds to a few hours.

For such applications, it is required for a device to wake up and listen to the network at regular intervals for any incoming data (so-called paging procedure).

eDRX allows the time interval during which a device is not listening to the network to be greatly extended, thus strongly reducing the power consumption of the device while remaining reachable from the network.

eDRX can be used without PSM or in conjunction with PSM to obtain additional power savings. Although it does not provide the same level of power reduction as PSM, eDRX provides a good compromise between device reachability and power consumption.

When a device initiates eDRX in the network, it can provide two preferred timer values to the network:

• Paging Transmission Window (T PTW): Time during which the device performs the DRX procedure, which can accommodate between 4 and 16 paging reception slots.

Between those two times, the IoT device module or chipset enters a so-called “Sleep Mode” during which the receive path of the radio chipset is deactivated.

In DT’s LTE-M networks where eDRX is supported, customers can specify the T PTW and T eDRX values to be applied in the network.

The drawback of using PSM is that the IoT device cannot be contacted by the network while its module or chipset is asleep. However, in this hibernation time, downlink data sent to the device can be buffered by the network and delivered subsequently after the device has resumed from his deep-sleep mode. This feature is called “Data Packet Buffering” or DPB.
The number and size of the data packets being buffered is specific to the visited networks which the device is attached to.
As an example, in DT’s German network, up to 10 packets of each 500 Bytes can be buffered until the device gets back in connected mode.

SMS (Mobile-Terminating and Mobile-Originated) is supported natively over the LTE-M network.
Telekom’s standard SMS-C address to be used when sending SMS-MO messages with a Telekom Global SIM is: +882285000010701
If SMS-MT messages can’t be delivered to the device (e.g. while in PSM mode), those are stored in Telekom’s SMS-C Center and message delivery attempts are initiated by the SMS-C following standard SMS delivery schemes and retry rules.
SMS sent to a Telekom Germany GSIM are stored for a maximum of 48 hours.

Voice over LTE-M is currently not supported on DT's LTE-M networks. This feature may however be introduced at a later stage.

The LTE-M standard supports two Coverage Enhancement (CE) Modes: CE Mode A and CE Mode B.
This is achieved by repeating Layer 3 (RRC, NAS) messages a predefined number of times, thereby increasing the probability of receivers to correctly receive and demodulate the message.
Each CE Mode determines the number of times downlink and uplink messages can be repeated to reach devices in poor coverage and the number of repetitions in each CE-Mode is predefined by the network.
The CE feature essentially increases maximum coupling loss by roughly:

In order for customers to take full advantage of LTE-M’s features and benefits across borders, Telekom is working closely with its Roaming Partners to enable LTE-M roaming across their respective networks.
This is achieved by exchanging information on the supported LTE-M features and performing extensive tests of those features under roaming conditions.
As a minimum, it is currently ensured that the following LTE-M key features are available within all Roaming Partner networks:

The latest list of DT’s LTE-M roaming partners can be found in the IoT Creators documentation library under: https://docs.iotcreators.com/docs/roaming-mobile-iot-networks-in-europe

As additional features get implemented in its network (e.g. eDRX, Voice), Telekom will provide full transparency of the support of those features by the Roaming Partner networks.

As a summary, the table below provides an overview of Telekom’s LTE-M key network features and associated parameters. This table will be enhanced as new features are launched and operator networks deployed within Telekom’s footprint.
Disclaimer: all parameters provided below are subjected to change and are therefore only indicative and provided without guarantee. This table shall be seen as a snapshot of DT’s network configuration as values may evolve over time.